Add the Magnums and chocolate chips to a blender and pulse until the mixture is combined but still has texture.

Place the ice cream mixture on a sheet of cling wrap before rolling into a log shape and securing the edges. Keep in the fridge for 2 hours or until completely firm.

For the Mint Meringue

Add the sugar, water, and golden syrup to a pot and gently simmer until the mixture reaches 240’C or until it reaches soft ball state which s tested by dropping a small amount of the mixture into cold water, after 10 seconds the ball should be a soft gel.

While the sugar mixture is simmering: add the egg whites and cream of tartar to a mixer and begin whisking on a medium speed until the egg whites reach soft peak. With the whisk still running at a high speed, slowly begin pouring in the hot sugar mixture until the mixture becomes thick and glossy. Add the Food colouring and mint flavouring  whisk until you reach the desired colour and taste. Place in a piping bag.

Unmold the set ice cream log onto a serving platter. Cut the end of the piping bag before piping along the log covering every the ice cream.

Using a blow torch lightly brown the outside of the meringue. Dip the mint leaves in the beaten egg white and finally coat in the castor sugar, allow to dry to use as a garnish.

For the Candied almonds

For the candied almonds:

Add the sugar to the pan and slow begin melting. When the sugar turns a light golden colour add the almonds and stir to combine for 30 – 45 seconds. Add spoonful’s of the almond sugar mixture to a silpat or baking paper and allow to set.

Remove the sticks from the Magnums before placing them in a blender and blending until completely smooth and the chocolate has been combined into the ice cream. Leave the ice cream in the blender to completely melt.

Add the cake flour to the blender and blend to combine into the frozen ice cream. Coat the inside of a mug with a non-stick spray. Before adding the batter and placing in the microwave to cook for 30 seconds bursts until the cake is just set.

Whip the cream with the sugar and cocoa until firm. Serve the warm cake with a dusting of cocoa the candied almonds and chocolate whipped cream. 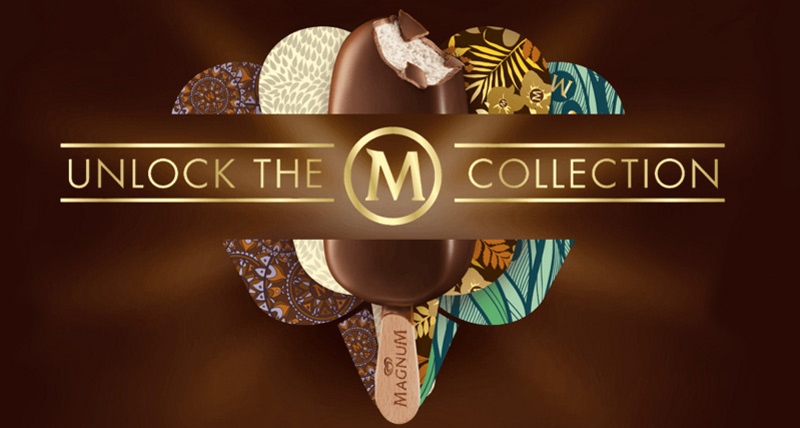