We connect with Chef & Author Pete Goffe-Wood as he teaches us how to prepare chicken in three different ways.

Pete has been a professional chef for over three decades. He was classically trained at the Beverly Hills Hotel in Umhlanga Rocks, Durban before he ventured abroad to London where he worked in some of the West End’s award-winning restaurants. After almost a decade abroad, Pete decided to return to South Africa in 1999 and has been making waves in the country’s culinary industry.

In addition to his time in London, Pete’s work has taken him to almost every corner of the globe. From the banks of the Chobe River in Namibia to Bangkok, Hanoi and Sydney, all the way to the Persian Gulf – Chef Pete Goffe-Wood has seen it all!

He has also worked in food hubs such as Paris, Budapest, Stuttgart, Istanbul, Zagreb and Moscow. While being a renowned chef, Pete has also authored three cookbooks: “A Life Digested”, “Kitchen Cowboys” and “Blues Restaurant – the essence of Cape Town” and has also written for multiple publications.

Pete made his TV debut as a judge on “MasterChef SA” for four seasons. He also dabbled in comedy when he appeared at the National Arts Festival in Grahamstown alongside comedian, Chris Forrest, in a cooking comedy show called “Don’t Burn Your Sausage.”

Currently, he is the judge on a TV show “Ultimate Braai Master”, while he consults for the Majeka House, Bosjes and Bazaar on Florida. 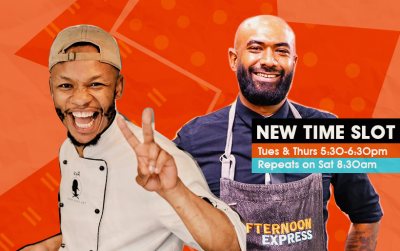 # 3
Heritage Masterclass with Chef Aya and